About a week ago I made a Twitter account (@Tradeitforbacon) and started tweeting about my bacon! I gotta admit, I was pretty surprised how quickly and how well people responded to my little operation, it seems that (for the most part) everyone loves bacon.

On Wednesday night, I got a tweet from a fella named @gmango_au, who offered to trade me a bottle of 1973 Penfolds Grange Hermitage for a kilo of my free range bacon. At first I thought it was a stitch up, but sure enough, the offer was legit….he even offered to de-risk the deal with a bottle of 2001 Bin 707 in the event the Grange was past it’s prime. This was another no-brainier, trade accepted.

If you don’t know anything about wine, Penfolds Grange Hermitage is widely regarded as one of the finest red wines in the world, and certainly one of Australia’s most collectible. The 1973 vintage was the last produced in open, wax lined fermenters at the Magill winery. All subsequent Grange’s have been made at Penfolds Nuriootpa winery.

@gmango_au is actually a bloke named Grant, a dead set legend from Melbourne who moved to Adelaide about a year ago. We caught up, had a beer, and made the trade. I gotta thank Grant for his kind offer, this kind of trade is way above and beyond what I ever expected when I started TIFB.

Here’s a few photos of Grant and my trade.

As far as my part of the deal went, Grant was the first trader to receive my latest batch of ethically raised, free to roam middle bacon. I sourced the meat direct from Ben and Bob at Wistow Springs Pork, who raise their pigs in an ethical and sustainable manner at their property near Strathalbyn.

I think that pigs that are raised outdoors and free range produce happier animals and better quality meat, and so far everyone that has tasted it has agreed.

The whole pork middle was cured for six and a half days in a mixture of coarse salt, pink salt, brown sugar, black pepper and ground coriander, and smoked for four hours with peach wood from my own back yard.

I smoked this batch at a slightly lower temperature than usual, which left the meat less firm, and generally more malleable….ideal for wrapping.

The pepper and coriander impart a sharp floral taste to the bacon, and the peach smoke gives the meat a soft and sweet aftertaste. On balance, I think I prefer the cherry wood I used last time, but peach is still pretty tasty.

Incidentally, Grant and his mate Damo cooked up a slab of the bacon not long after getting home, and Grant thinks he got the better end of our deal!

There’s a little epilogue to my ’73 Grange trade story. A few weeks later the Tasting Australia festival, in conjunction with Penfolds, ran a competition on Twitter….”tweet your favorite Grange memory”. I shared the story of my trade with Grant, and was lucky enough to win……ANOTHER BOTTLE OF GRANGE!. This time a brand spanking new 2009 vintage, housed in a wooden crate.

So that’s two bottles of Grange for one kilo of bacon….unbelievable. 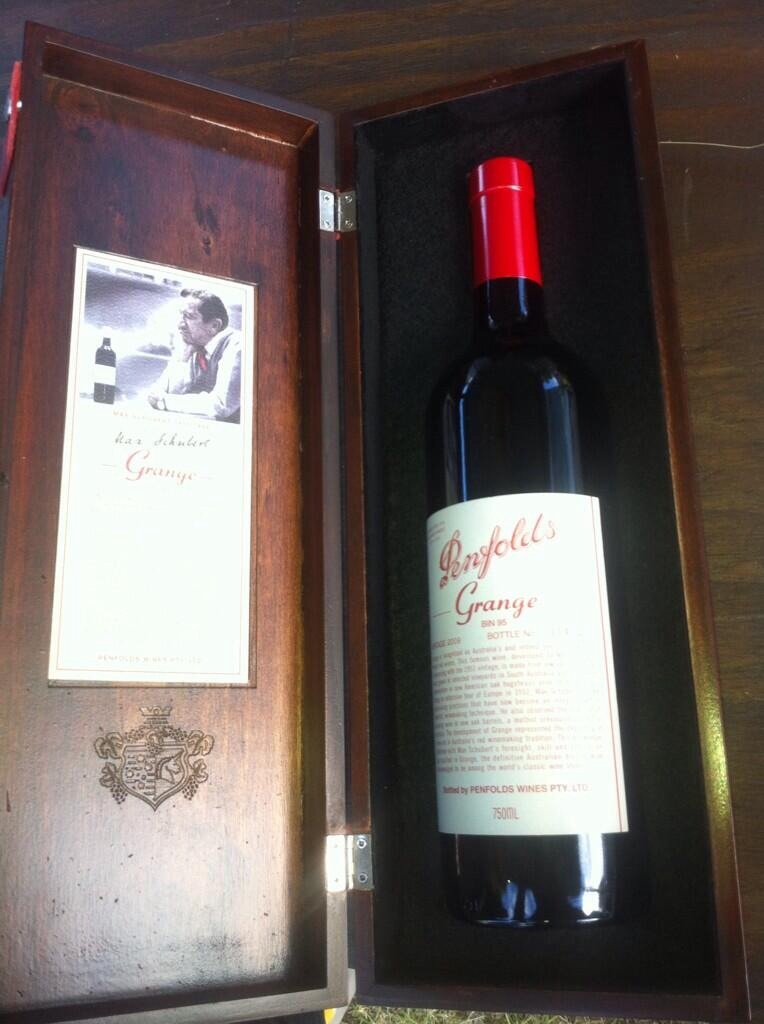