Back in 2012, I bought an offset smoker.  Offset smokers are far more common in America, where the term ‘barbeque’ has a completely different meaning than it does here in Australia.  Imagine a keg size barrel (the firebox) attached to the side of a 44-gallon drum (the cooking chamber).  If you can’t imagine that, then check out the picture below. 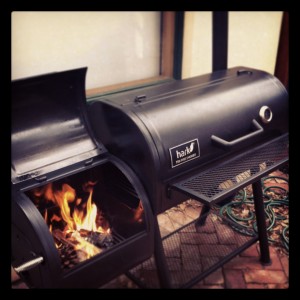 You set a fire with charcoal or wood in the firebox, and the heat wafts through the cooking chamber, slowly cooking the meat and bathing it in a delicious light smoke at the same time.  Pretty rad.

Anyway, after smoking everything from ribs and brisket to garlic and chilies, I decided to turn my hand to bacon.  Bacon is one of those foods that most people are fond of, but not many people would consider trying to make at home.  For the most part, I’ve also noticed people seem to be able to tell the difference between good bacon and bad bacon, but not the different types or styles, of which there are more than you think.

Bacon is generally first cured with a mixture of salt, sugar and curing salt, either dry, or in a brine solution, for anywhere from a number of days to a number of weeks.  The cure often contains any number of different ingredients to further flavour the final product.  After that, the cured pork can either be air dried, smoked, or even boiled before it’s ready to eat.  It can also be produced using a number of different cuts of pork.  In Australia we typically buy middle bacon (the whole side of the pig, from loin to belly), but you can also get short cut bacon (loin only, the Yanks call this back bacon), streaky bacon (belly only, the Italians call this Pancetta)….I’ve even read about people making bacon with pig’s cheek, which is called Jowl bacon.

Mass produced supermarket bacon is often injected with a brine solution that contains excessive nitrates and nitrites to help preserve the meat, and liquid smoke to add artificial flavour, before being vacuum sealed and thrown on the shelf.  The resultant bacon is plump with liquid, packed with preservatives, and typically not very nice to eat.  If you’ve ever noticed the watery white scum that’s left in the pan after frying this bacon, you’ll know what I’m talking about.

Furthermore, somewhere in the order of 70% of the bacon and ham we eat in Australia is made from imported pork, a figure that astounds and disappoints me.

As you can see, there’s bacon, and then there’s BACON.

So when I set out to make my own, I decided to try and make the highest quality, tastiest bacon around…..to source the best quality Australian pork, the finest cure ingredients, and the most excellent wood for smoking. I recognise that this isn’t going to be a fast process, I don’t expect to stumble on the perfect recipe or technique straight off the bat. Notwithstanding, I do expect to create some pretty delicious by-products in the process….far more than any one man can consume within the confines of a balanced diet. This is the reason I created tradeitforbacon.com!

My plan is to cure and smoke as much pork as I need to perfect the art of making bacon; what I don’t eat myself, I’m going to trade with you in one kilo packs. You can expect the bacon to be sliced, vacuum sealed, ready to eat, and generally better than any mass produced bacon you’ve ever tried.

All you have to do if you’d like to try my bacon, is go to the Propose a Trade page of this blog, leave your details, and let me know what you’d like to trade for a kilo of bacon. It’s that easy!

If you’d like to read a little more about what goes into my bacon, check out the About My Bacon page of this blog.