Making bacon is actually pretty easy, take a slab of pork, cure it in salt and sugar, then dry it or smoke it, and you’re done. At least that’s how it appears on the surface. In reality there’s a number of variables within these simple processes that can affect the flavor and texture of the bacon, and potentially even spoil the meat. As far as I’ve read, there’s countless techniques and recipes for bacon. I don’t suppose there’s any one correct method (after all we’ve been making it for over 500 years), and I’m sure many people are going to offer advice on how to do it better. In any case, this is how I make my bacon.

First things first, you have to start with a nice piece of Australian pork from a well fed pig. I’m still on the fence with regard to the whole ‘organic’ argument when it comes to pigs and other livestock. Does ‘organic’ mean the animal was raised on a certified organic farm, or just that it was fed organic feed? Whatever the answer is, I think that pigs that are raised outdoors and free range in an ethical and sustainable way (organic or otherwise), produce happier animals and better quality meat, and ultimately I plan to ensure all the bacon I make comes from pigs that are certified ‘Outdoor Free Range’. I’m still trying a few different suppliers, but if anyone can recommend a good pork wholesaler in Adelaide, feel free to leave me a comment.

Here’s a picture of me with a whole pork middle. 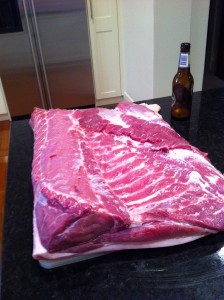 Once the pork is cut into manageable size slabs, the next step is to cure it. The basic bacon cure contains nothing more than coarse salt, curing salt, and sugar…..that’s it.

A bit about curing salt…..

Curing salt contains Sodium Nitrite (94% Sodium, 6% Nitrite) which is an anti-microbial agent, that kills bad bacteria whilst the meat is curing. In the case of bacon, it’s also what creates the distinct ‘bacony’ flavour, and helps maintain the pink colour once cooked. Without it, you’d be eating grey/brown salted pork belly….not bacon. Nitrates and Nitrites are naturally occurring chemicals that are found in green vegetables such as spinach and celery. Our bodies convert Nitrates to Nitrites, which works as a powerful antibacterial agent within our stomachs. Many people believe Sodium Nitrite to be a harmful chemical additive, and indeed in excess quantities that may be the case. However, in the quantities used in my bacon production (less than 1tsp of curing salt per 1kg of meat), I think the pros far outweigh the cons, and as such I plan to leave it in. After all, nothing like a cheeky bout of botulism to have you reaching for the curing salt!

The cure can be embellished with any number of flavours. To start with, I plan on keeping things pretty simple…..maple syrup cured bacon, pepper cured bacon, maybe even paprika cured bacon. That said, the possibilities are endless, so watch this space for flavour combo updates.

From there, the pork can either be dry-cured in an airtight container, or wet-cured in a brine solution, for anywhere between four and seven days. A few more days will give a saltier, denser bacon, a few less days will have the opposite effect. Both methods have their merits, and indeed produce bacons of different taste and texture. A dry-cured bacon is best left to air dry, and produces a firm, dense bacon which fries quickly giving off little liquid. Wet-cured bacon on the other hand gives a more moist product, that lends itself to smoking.

Once the bacon is finished curing, I wash it thoroughly, pat it dry, and let it mature uncovered in the fridge for up to two weeks. I know this sounds like a long time, but I’ve found that this step in the process is crucial, and one that is often skipped in the making of mass produced bacon. During this time, the salt equalises through the meat, and it’s flavour changes and develops, a lot more than you’d believe.

The last step in the process is smoking. Smoking adds another level of flavour to the bacon, and in the past was done to help preserve the meat for longer. I’ve hot-smoked bacon in my offset smoker, and cold-smoked it in my wine barrel cold smoker; both products are delicious but distinctly different in their taste and texture. Hot smoking slowly cooks the meat whilst imparting a delicious light smoke flavour throughout, and takes between four and five hours. During the cold smoking process, temperatures are maintained under 30 degrees C and as such the meat does not cook. The light, gentle smoke wafts over the meat for between one and three days and results in a smokey, but softer textured bacon.

Here’s a picture of my bacon, half way through the hot smoking process in my offset smoker. Incidentally, that’s a 4kg chuck steak roast chillin out on the left there…never waste the smoke! 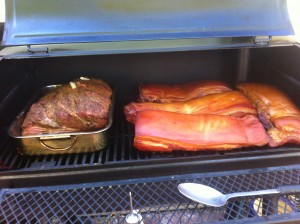 You can’t smoke meat with just any old wood. Many ‘sappy’ woods including some eucalypts produce a thick, dense smoke which can impart an acrid flavour to the meat. Some people say leaving bark on the log will have the same effect, but I’m not convinced. The best woods for smoking are fruit woods such as apple, cherry and pecan…..hickory, mesquite and oak arre also excellent. So far I’ve experimented with peach, apple, cherry and french barrel oak.

That’s pretty much it. All that’s left to do is slice it, cook it and eat it (or trade it in my case). 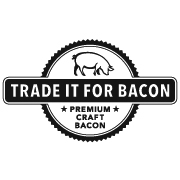